Donald Trump tells Americans that it is a technology breakthrough, a wave of the future; everybody will own one; better get in now! He is personally endorsing and hyping the “revolutionary IRIS V Video Phone”, the flagship product and the new icon of the multi-level marketing company, ACN, for which Donald Trump serves as pitchman-in-chief. He trumpets the video phone on Celebrity Apprentice. ACN, for its part, promotes Donald Trump all over its website and at all its recruitment meetings. “If Donald Trump says this phone is a hot new item, who can doubt it?” is the message ACN sends to hundreds of thousands of consumers. 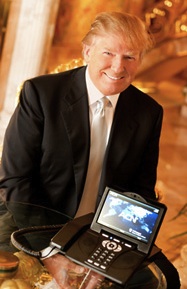 But the latest disclosures to the SEC by the video phone’s manufacturer, WorldGate Communications,  indicate the market for this device has collapsed. Demand for this product – if it ever existed in the real marketplace – is vanishing. The top management of the company has resigned. Orders from ACN have been drastically cut back. The value of the stock of the phone manufacturer has been virtually wiped out. The company reported to the SEC that it may seek bankruptcy protection very soon.

In its 10Q report to the SEC for the first quarter of 2011, the manufacturer reported:

“On March 22, 2011, we received a significantly reduced ordering forecast from ACN DPS for the remainder of 2011, based in part on a significant build up in inventory of unsold video phones held by ACN DPS… Accordingly, we expect that revenues from sales to ACN DPS in fiscal year 2011 will be significantly lower than in fiscal year 2010… In view of our current cash resources, nondiscretionary expenses, debt and near term debt service obligations, we intend to explore all strategic alternatives available to us, including… financial reorganization, liquidation and/or ceasing operations. We may determine that it is in our best interests to voluntarily seek relief under Chapter 11 of the U.S. Bankruptcy Code. Seeking relief under the U.S. Bankruptcy Code…”

Yet, despite the manufacturer’s notice to the government that it is on the verge of collapse and sales to ACN have been drastically cut back, ACN in the very same month issued a press release that is currently posted on ACN’s website proclaiming Trump’s personal endorsement of the ACN video phone. Donald Trump is quoted, “I think the ACN Video Phone is amazing. It’s connecting people face-to-face regardless of where they are. I simply can’t imagine anybody using this phone and not loving it!”

Does Video Phone Decline Mirror Company?
The discrepancy between the ACN/Trump claims and the market reality  go to a more basic issue concerning ACN – the growth of the company itself and the use of exaggerated or false claims to lure consumers to sign on as sales representatives.

ACN promoters often tout the company as moving rapidly toward a billion dollars in revenue. Consumers are exhorted to “get in now”. ACN’s fast growth is hyped as one of the main reasons for signing on. Yet, according to ACN’s own statements, the company has, apparently, not increased its revenue or customer base at all in four years! In 2006 ACN reported to the FTC that it had exactly the same number of customers and total revenue as it told NBC-affiliate reporters in Charlotte, NC in 2010. But one figure did change during this time. ACN doubled the number of salespeople! In that time, the number of USA sales reps went from 50,000 to 100,000 according to ACN. So, based on ACN’s data, more of ACN’s money would have to be coming directly from the salespeople. The data would also indicate that the mean average income of all salespersons would have to have decreased over the last four years, while the company itself did not grow.

News media investigators and Pyramid Scheme Alert had earlier raised the question of the actual value and practical usefulness of this “revolutionary” phone that Donald Trump was hyping and ACN was selling mostly, it appeared, to its own sales representatives. It was pointed out that video phone transmission can be done for free on any computer using Skype. Today, video calls can be done on many cell phones as well as iPads and Droids.  So who needs a $179 ACN video phone? ACN’s video phones are not portable and they require a monthly service charge. Of course, they are no good at all for video unless someone you are calling also has the same phone and the ACN service.

Consumer Demand or MLM Market Making?
Was there ever a demand for these products? Or was the “demand” a manipulation of ACN’s MLM scheme? ACN was the only significant buyer of the WorldGate phones.  The majority ownership of WorldGate, the manufacturer, was held by the founders of ACN. And ACN appeared to have a captive market that it could “make” – ACN’s multi-level marketing sales reps. When a consumer signed up with ACN as a sales rep, he/she was hustled into buying one or more of the phones. This is after paying about $500 to sign up. Why pay $500 and buy a phone almost no one would need? Perhaps because ACN promises that big incomes are available to those who buy in and recruit others! With the “great income” offer, ACN could induce thousands to buy the phone and  recruit others who would similarly be induced to buy the device. These “sales” may not have been about demand or need for this video phone, but about need for the income that ACN promised along with the purchase. And the phone purchase was endorsed by the great financial guru, Donald Trump.

Now, however, it appears that even the “unlimited” income offer is not working. The obsolescence of this product in the face of cell phone and Skype technology may be greater than even Donald Trump’s endorsement.